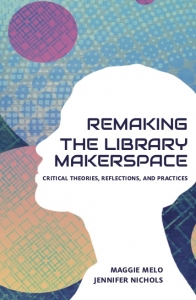 The Maker Movement is a social phenomenon that has generated excitement around tech-centric making and learning throughout the world since the mid-2000s. Hailing from Silicon Valley, the Maker Movement has inspired hundreds of libraries across the US to integrate makerspaces into their own ecosystems to further support users’ learning and discovery. While the affordances of the Maker Movement have been highlighted extensively over the past decade, the limitations and drawbacks of this movement have been largely overshadowed. The Maker Movement has popularized a narrow, classist, predominantly white, and heteronormative conceptualization of maker culture. Makerspaces, like libraries, are not neutral, but rather are imbued with ideologies stemming from Silicon Valley that consequently dictate who makes, why making occurs, and what is considered making. This edited collection centers the limitations and challenges emerging from this particular brand of ‘maker culture,’ and emphasizes the critical work that is being done to cultivate anti-oppressive, inclusive and equitable making environments.

Many authors have focused on how to start a makerspace and/or the benefits of integrating one within a library. Alternatively, this edited collection captures how librarians and educators have disrupted and re-made their makerspaces in response to the constraints of the Maker Movement’s ‘makerspace.’ This collection offers readers a critical examination of library makerspaces at the site of praxis: theory, reflection, and action. Particularly, critical considerations around race, age, class, gender, sexuality, power, and ability will be centered in this volume. As such, the intended audience for this body of work are librarians, educators, administrators, and library professionals who work with(in) or are interested in library makerspaces.